The main route of transmission is through direct contact between infected and uninfected animals. These close contacts are particularly common during animal transport. Intensive farming may also increase the risk of transmission, as the pigs are raised in very close proximity to each other. The direct transfer of the virus probably occurs either by pigs touching noses, or through dried mucus. Airborne transmission through the aerosols produced by pigs coughing or sneezing are also an important means of infection. The virus usually spreads quickly through a herd, infecting all the pigs within just a few days. Transmission may also occur through wild animals, such as wild boar, which can spread the disease between farms.

Transmission to humans
People who work with poultry and swine, especially people with intense exposures, are at increased risk of zoonotic infection with influenza virus endemic in these animals, and constitute a population of human hosts in which zoonosis and reassortment can co-occur. Vaccination of these workers against influenza and surveillance for new influenza strains among this population may therefore be an important public health measure. Transmission of influenza from swine to humans who work with swine was documented in a small surveillance study performed in 2004 at the University of Iowa. This study among others forms the basis of a recommendation that people whose jobs involve handling poultry and swine be the focus of increased public health surveillance. Other professions at particular risk of infection are veterinarians and meat processing workers, although the risk of infection for both of these groups is lower than that of farm workers (see figure 1). 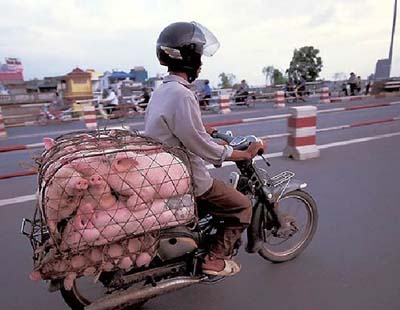 Interaction with avian H5N1 in pigs
Pigs are unusual as they can be infected with influenza strains that usually infect three different species: pigs, birds and humans. This makes pigs a host where influenza viruses might exchange genes, producing new and dangerous strains. Avian influenza virus H3N2 is endemic in pigs in China and has been detected in pigs in Vietnam, increasing fears of the emergence of new variant strains. H3N2 evolved from H2N2 by antigenic shift. In August 2004, researchers in China found H5N1 in pigs.

These H5N1 infections may be quite common: in a survey of 10 apparently healthy pigs housed near poultry farms in West Java, where avian flu had broken out, five of the pig samples contained the H5N1 virus. The Indonesian government has since found similar results in the same region. Additional tests of 150 pigs outside the area were negative.