The word Influenza comes from the Italian language meaning "influence" and refers to the cause of the disease; initially, this ascribed illness to unfavorable astrological influences. Changes in medical thought led to its modification to influenza del freddo, meaning "influence of the cold". The word influenza was first used in English to refer to the disease we know today in 1703 by J. Hugger of the University of Edinburgh in his thesis De Catarrho epidemio, vel Influenza, prout in India occidentali sese ostendit. Archaic terms for influenza include epidemic catarrh, grippe (from the French, first used by Molyneaux in 1694), sweating sickness, and Spanish fever (particularly for the 1918 flu pandemic strain).

History of Influenza Pandemics and Outbreaks

The symptoms of human influenza were clearly described by Hippocrates roughly 2,400 years ago. Although the virus seems to have caused epidemics throughout human history, historical data on influenza are difficult to interpret, because the symptoms can be similar to those of other respiratory diseases. The disease may have spread from Europe to the Americas as early as the European colonization of the Americas; since almost the entire indigenous population of the Antilles was killed by an epidemic resembling influenza that broke out in 1493, after the arrival of Christopher Columbus.

The first convincing record of an influenza pandemic was of an outbreak in 1580, which began in Russia and spread to Europe via Africa. In Rome, over 8,000 people were killed, and several Spanish cities were almost wiped out. Pandemics continued sporadically throughout the 17th and 18th centuries, with the pandemic of 1830–1833 being particularly widespread; it infected approximately a quarter of the people exposed.

The most famous and lethal outbreak was the 1918 flu pandemic (Spanish flu pandemic) (type A influenza, H1N1 subtype), which lasted from 1918 to 1919 (see figure 1). It is not known exactly how many it killed, but estimates range from 20 to 100 million people. This pandemic has been described as "the greatest medical holocaust in history" and may have killed as many people as the Black Death. This huge death toll was caused by an extremely high infection rate of up to 50% and the extreme severity of the symptoms, suspected to be caused by cytokine storms. Indeed, symptoms in 1918 were so unusual that initially influenza was misdiagnosed as dengue, cholera, or typhoid. One observer wrote, "One of the most striking of the complications was hemorrhage from mucous membranes, especially from the nose, stomach, and intestine. Bleeding from the ears and petechial hemorrhages in the skin also occurred." The majority of deaths were from bacterial pneumonia, a secondary infection caused by influenza, but the virus also killed people directly, causing massive hemorrhages and edema in the lung. 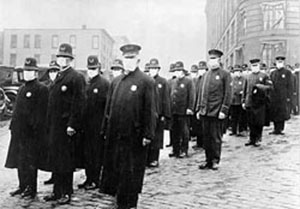 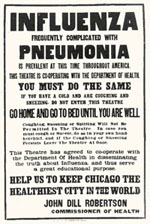 
The 1918 flu pandemic (Spanish flu pandemic) was truly global, spreading even to the Arctic and remote Pacific islands. The unusually severe disease killed between 2 and 20% of those infected, as opposed to the more usual flu epidemic mortality rate of 0.1%. Another unusual feature of this pandemic was that it mostly killed young adults, with 99% of pandemic influenza deaths occurring in people under 65, and more than half in young adults 20 to 40 years old. This is unusual since influenza is normally most deadly to the very young (under age 2) and the very old (over age 70). The total mortality of the 1918–1919 pandemic is not known, but it is estimated that 2.5% to 5% of the world's population was killed. As many as 25 million may have been killed in the first 25 weeks; in contrast, HIV/AIDS has killed 25 million in its first 25 years.

Later flu pandemics were not so devastating. They included the 1957 Asian Flu (type A, H2N2 strain) and the 1968 Hong Kong Flu (type A, H3N2 strain), but even these smaller outbreaks killed millions of people. In later pandemics antibiotics were available to control secondary infections and this may have helped reduce mortality compared to the Spanish Flu of 1918.

The first influenza virus to be isolated was from poultry, when in 1901 the agent causing a disease called "fowl plague" was passed through Chamberland filters, which have pores that are too small for bacteria to pass through. The etiological cause of influenza, the Orthomyxoviridae family of viruses, was first discovered in pigs by Richard Shope in 1931. This discovery was shortly followed by the isolation of the virus from humans by a group headed by Patrick Laidlaw at the Medical Research Council of the United Kingdom in 1933. However, it was not until Wendell Stanley first crystallized tobacco mosaic virus in 1935 that the non-cellular nature of viruses was appreciated.

The first significant step towards preventing influenza was the development in 1944 of a killed-virus vaccine for influenza by Thomas Francis, Jr. This built on work by Australian Frank Macfarlane Burnet, who showed that the virus lost virulence when it was cultured in fertilized hen's eggs. Application of this observation by Francis allowed his group of researchers at the University of Michigan to develop the first influenza vaccine, with support from the U.S. Army. The Army was deeply involved in this research due to its experience of influenza in World War I, when thousands of troops were killed by the virus in a matter of months. In comparison to vaccines, the development of anti-influenza drugs has been slower, with amantadine being licensed in 1966 and, almost thirty years later, the next class of drugs (the neuraminidase inhibitors) being developed.