Antigenic shift is the process by which at least two different strains of a virus (or different viruses), especially influenza, combine to form a new subtype having a mixture of the surface antigens of the two original strains. The term antigenic shift is more often applied specifically (but is not limited) to the influenza literature, as it is the best known example (e.g. visna virus in sheep). Antigenic shift is a specific case of reassortment or viral shift that confers a phenotypic change.

Antigenic shift is contrasted with antigenic drift, which is the natural mutation over time of known strains of influenza (or other things, in a more general sense) which may lead to a loss of immunity, or in vaccine mismatch. Antigenic drift occurs in all types of influenza including influenza virus A, influenza B and influenza C. Antigenic shift, however, occurs only in influenzavirus A because it infects more than just humans. Affected species include other mammals and birds, giving influenza A the opportunity for a major reorganization of surface antigens. Influenza B and C principally infect humans, minimizing the chance that a reassortment will change its phenotype drastically.

Antigenic shift is important for the emergence of new viral pathogens as it is a pathway that viruses may follow to enter a new niche (see figure 1). It could occur with primate viruses and may be a factor for the appearance of new viruses in the human species such as HIV. Due to the structure of its genome, HIV does not undergo reassortment, but it does recombine freely and via superinfection HIV can produce recombinant HIV strains that differ significantly from their ancestors. 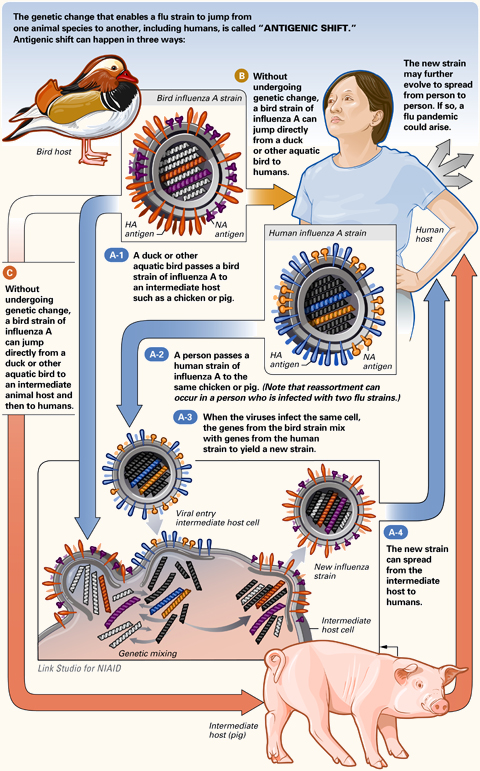 
Flu strains are named after their types of hemagglutinin and neuraminidase surface proteins, so they will be called, for example, H3N2 for type-3 hemagglutinin and type-2 neuraminidase. When two different strains of influenza infect the same cell simultaneously, their protein capsids and lipid envelopes are removed, exposing their RNA, which is then transcribed to mRNA. The host cell then forms new viruses that combine their antigens; for example, H3N2 and H5N1 can form H5N2 this way. Because the human immune system has difficulty recognizing the new influenza strain, it may be highly dangerous. Influenza viruses which have undergone antigenic shift have caused the Asian Flu pandemic of 1957, the Hong Kong Flu pandemic of 1968, and the Swine Flu scare of 1976. One increasingly worrying situation is the possible antigenic shift between avian influenza and human influenza. This antigenic shift could cause the formation of a highly virulent virus.

For example, if a pig was infected with a human influenza virus and an avian influenza virus at the same time, an antigenic shift could occur, producing a new virus that had most of the genes from the human virus, but a hemagglutinin or neuraminidase from the avian virus. The resulting new virus would likely be able to infect humans and spread from person to person, but it would have surface proteins (hemagglutinin and/or neuraminidase) not previously seen in influenza viruses that infect humans, and therefore to which most people have little or no immune protection. If this new virus causes illness in people and can be transmitted easily from person to person, an influenza pandemic can occur.